There have been many opportunities during the past year for alumni as well as the entire Yale community to celebrate the 50th anniversary of coeducation in Yale College.  This milestone was recognized through an array of activities on the Yale campus and beyond – in student forums, academic offerings, museum exhibitions, at local Yale clubs, in Shared Interest Groups, and much more. A selection of this material, including the panels recorded during the 50th anniversary weekend in September 2019 is available on this web page and elsewhere on the website.  In addition, we hope you will log on for more virtual anniversary programming this summer.  You can find events here.

The 50th Anniversary Committee was charged with planning a special commemorative event for September 19-22, 2019 – a first-ever gathering of women in the classes of 1971, 1972 and 1973 who matriculated at Yale in 1969 as the university’s first undergraduate women. This weekend was a way for the university to honor the trail-blazing women in these three classes and to engage with them in a series of thoughtful discussions about their role in transforming Yale College.

Program:  View the full program for the September 19-22 weekend.

Who attended: View who came by graduation year or who’s coming in alphabetical order. View panelists and speakers.

Remembering classmates who have passed away: Read rememberances of women in the classes of 1971, 1972, and 1973.

The Weekend in Review!

On September 19-22, 2019, women from the three classes who entered Yale College in 1969 assembled in New Haven for a historic weekend. The occasion was marked by a series of panels, presentations, exhibitions, and celebratory gatherings; it was also a time for attendees to  connect, reconnect, and share their stories with each other.

Images: View a complete set of photos taken by a professional photographer during the weekend.

Videos: View panels and sessions from the 50th Anniversary weekend.

Projects to Preserve Our History

As part of the 50th anniversary celebration, the Committee launched several initiatives to preserve the history of coeducation in Yale College – oral histories, written histories, and an enlarged archive – as well as participating in projects with Sterling Memorial Library and other partners.

The Oral History Project
This project sought to record, preserve, and make available to researchers and others, an archive of high-quality audio-visual accounts of the early years of coeducation at Yale as experienced by women in the classes of 1971, 1972, and 1973 who arrived on campus in September 1969 as Yale’s first women undergraduates.  Filming has now ended but you can learn more about the project through the links below.

The Written History Project
This initiative – a companion project to the oral histories – sought to capture in writing the experiences of as many women in the classes of 1971, 1972, and 1973 as possible in order to provide wide perspective on the history of undergraduate coeducation at Yale. These written submissions, along with the oral histories, will be archived in Sterling Memorial Library. We hope these efforts will provide future generations with an accurate and compelling picture of this transformative era in the university’s history.

The Archives Project
Over the years, many classmates have collected historical material that is important to preserve. The University Archives is seeking to collect records and documentation of student life and the Yale community – including material from the early years of coeducation. Photos, diaries, correspondence, and more are welcome.  Learn more about the kinds of materials the Library is seeking and how to donate items. 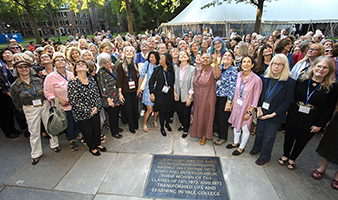 Explore photos and video from the four-day gathering of Yale College’s “First Women.”

END_OF_DOCUMENT_TOKEN_TO_BE_REPLACED

Send us your questions or comments and find out how to update your contact information.